I acknowledge the Traditional Owners on whose land I walk, I work and I live. I pay my respects to Elders past, present and future.

Leading the expansion into the tropical north were young single men with adventurous spirits who were willing to risk money, spirit and health. However at the forefront of the frontier march there were always a few intrepid women, some even widows with children sheltering in the folds of their skirts. Despite being few in number they were there and often in the most unexpected places.
Archival material relating to the history of the Herbert River Valley is, not unexpectedly, predominantly written from the pioneering man’s perspective for at first the new European community was dominated by males. The prevailing belief was that white people could not physically work in the tropics and the effects of the climate on white women and children would be even more detrimental to their health.  Fortunately there are photographs that tell a different story, and they were taken by a woman who earned her living at the forefront of frontier tropical north Queensland.
The woman is pioneering photographer HARRIETT BRIMS who regrettably has received no local recognition. Fortunately she has been recognized nationally.  D. Byrne writes in a work entitled Heritage, The National Women’s Art Book: 500 works by 500 Australian Women Artists from Colonial Times to 1955 that Harriett Brims “occupies a unique place in the history of the profession largely because of the environment in which she worked and the manner in which she carried out her activities.”
Harriett Pettifore Brims (1864-1939) was married to Donald Brims and had five children when in about 1894, the family moved to Ingham. There, near the mouth of the Seymour River, Donald constructed a homestead with an adjoining sawmill and wharf. In the township of Ingham Harriett Brims established herself professionally as a photographer. Pugh’s Trade Directories of 1902 lists her as proprietor of the ‘Britannia Studios’. In 1903 they moved north to Mareeba.
Far from being the stereotyped woman photographer of the era, never venturing from the safety of the studio, she rather did much of her work outside travelling between isolated farm houses, townships and settlements. She would live in a rough tent if necessary and would be assisted by Indigenous Aboriginal helpers.
Her glass plate negatives have survived. She used dry-plate cameras manufactured by her husband. They were made from local woods, while the shutters were made from the opium tins thrown away by the Chinese plantations workers. Her subject matter ranged from the standard studio photographs to landscapes including views of Wallaman Falls, to South Sea Islander (Kanaka) workers in their traditional dress, to views of the mills, including Gairloch and Macknade to more personal ones as the one of her husband building the steamboat ‘Emilie.’
Her photographs reveal a growing Ingham town and district, a family happy and enjoying life and “the physical grandeur of the North at a time when the region was searching for its political and social identity.”
Sources: Byrne, D. Heritage, The National Women’s Art Book: 500 works by 500 Australian Women Artists from Colonial Times to 1955 edited by Joan Kerr. 117-118, 320. Roseville East: Craftsman House, 1995 and
Descriptive information and to see a selection of her photographs:State Library of Queensland website http://hdl.handle.net/10462/eadarc/7397 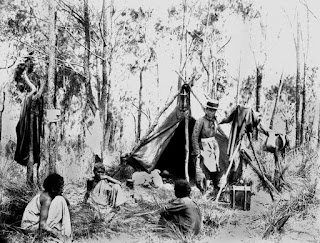 On location in the bush. (State Library of Queensland) 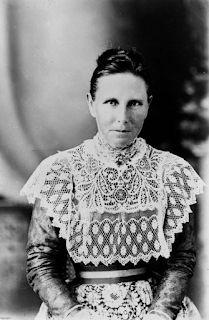 Self portrait (State Library of Queensland) 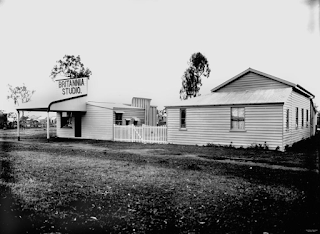 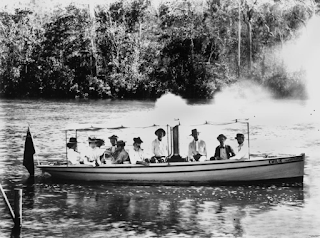 Boating on the Seymour River (State Library of Queensland)
Posted by Dr Bianka Vidonja Balanzategui at 20:35

Dr Bianka Vidonja Balanzategui
I am an adjunct lecturer, James Cook University, historian and historical consultant. My professional expertise includes post World War 2 displaced persons migration history and Australian sugar industry history. I have published not only in Australia, but in collaboration with the Centre for Basque Studies, University of Nevada, Reno, and in a wide range of academic journals. I have been contracted as historical consultant on numerous community projects,